Maria has a very pretty mini doll that she is giving away!
Go to http://maminiatures.blogspot.com/
by conny
Posted by Hopblogger at 7:36 AM No comments:

A COUPLE OF GIVEAWAYS!!

This dollhouse is called 'ASHLEY'.
Born 1994.
Bought as a kit from Hobby Lobby. 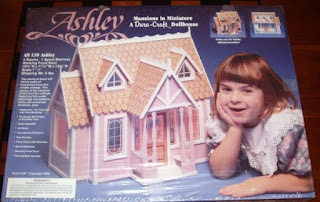 The kit when put together was painted the
same color as you see on the box.﻿
The color is so cute and sweet!
I kept it for years and when we moved,
I initially gave this sweet cottage to my
Mother.
Upon her death - I received it back.
It was then that I gave it to my grand daughter
Brie.
It never looked its age.
This is how I decorated the inside
all those many years ago.
Wallpaper is on the first floor.
The top floor is not wallpaper - but CLOTH!
There was
something in that little alcove.
I don't remember what it was! 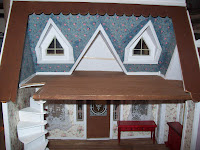 My grand daughter was too young

to receive this.
So anyway trouble brewed!
As you can see the railings at the

top of the stairs vanished into
thin air!!
No where to be seen.
The trash patrol took it to the
dump!!
The rest of the top floor,
the roof, windows, walls & floor
are still in very good shape.
That's a relief! 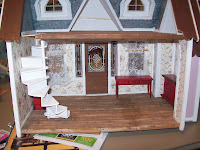 The first floor was hit the hardest
from a storm.

Hurricane Brie and her
friends wanted to see if Barbie
could fly thru the bay window!

Do you think she made it thru?? 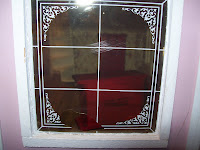 ﻿
A top gable is missing!
Ump - it must have fell off
from a bolt of lightening!

One piece of a gable is broken
off.
What happened here?
Godzilla must have taken
a bite out of it!
﻿ 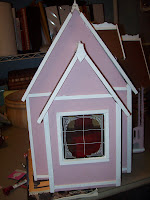 The bad thing is - is that Ken

isn't even going to pay his part of
the damages.
He left it for the owner to fix.

Do you see where my finer is showing
you a large hole! 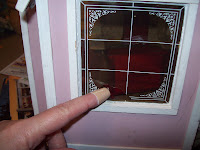 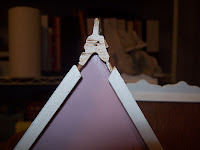 The front got hit pretty hard
with something or someone! 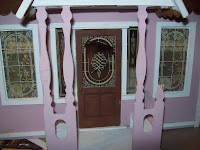 Here is the front door window.
It used to be so pretty!
But I was told that,
'Ken tried to break into the house'.
Don't worry - he got arrested!!!
Apparently he thought that there
were some hidden jewels inside.
Where is his brain!

Perhaps, Ken thought that the
break-in would not be
noticeable.
What do you think?

I cannot fix that window! 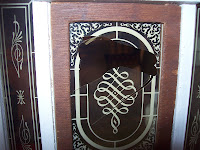 Another day, another project.
I do not know if the little house
is going to be the same once I
am finished with it.

Looks like I have inherited the little
cottage back!
Time to re-vamp it!

Thanks for stopping by!
Conny
Posted by Hopblogger at 7:03 PM No comments: