Now, we talk about the china doll on the right.
The woman dressed in plaid.
Amazon woman!

Her pretty apron is stitched with the
dress and the dress is cut crooked.
You know, I believe that I have seen some
of this fabric over the years.. 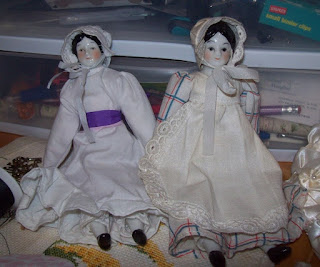 This china doll's body is made out of very
poor cotton.
Her body is almost see-thru.
A pinky/red color shows thru the cotton! 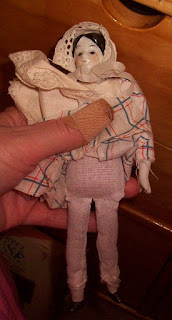 I took her clothes off.
Removed her head, arms and legs!

Her little body was stuffed hard
as a rock!!

At first I did not know what she was
stuffed with until I started pulling
it out. 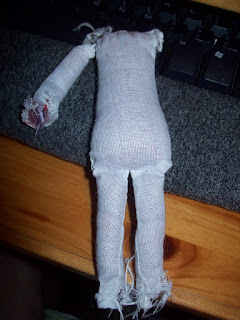 Look at what she was stuffed with.
It is
DRYER LINT!!!

Something red was in the dryer.

How much lint would it take to stuff
one of these dolls?
And how long would it take you to collect
enough lint needed to stuff it!
Can you imagine stuffing a large doll
with lint!!

Next time I  decide to make a rag doll,
perhaps I will see how long it takes
to collect enough lint to stuff it!

Anyway her old body with lint is long-gone
away from me!!!
I got tired of sneezing! 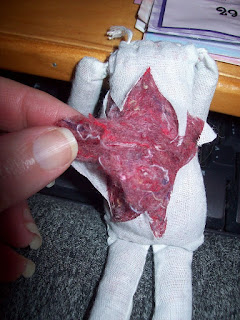 Thanks for stopping by!
Conny