When I was a young, and ever since I can remember
my Mother has always bought
me one or two Barbie's with some
new clothes every Christmas.
That was something that I always looked forward
to. They were beautiful dolls.

By the time I got married I had amassed over 20
of those dolls with so many clothes that Barbie could have opened
up her own Department store.
Only a few of these clothes were ever played with.
Of course I had my favorites.
Sure I would dress them - occasionally.
But most of
all I did not want to damage them.
I loved them dearly.
All of their clothes were in mint condition.
Well, needless to say that when
I did marry I gave everyone of them away.
Do not know
what ever possessed me to do such a thing - to give away
the dolls that I cherished.
Perhaps it was the moment. Perhaps I thought
that I was grown up enough that I
did not need them any longer. Who knows!
I had a very rare set
of Barbie and Ken Majorette dolls.
Given to me by my sister when she did not
want them anymore.
She never played with hers either.
Still in the wide flat
box holding Ken and Barbie in that box.
The entire set in mint condition!

Majorette Barbie had beautiful
almost white colored long hair pulled up into a pony
tail. With hair around the pony tail
to hide the rubber band.
She had her complete costume along with her
Pom-poms and Baton.
Ken had his complete outfit.
Their outfits were red and white and I
also kept them in
their mint condition box, the same
as my sister did.
I never played with them either.
I looked at it as a prize!
Never thought about what their value would be
later on in regards of sentimentality
or monetary value.

I will never forget what they looked like.
Never again have I ever seen that particular set
or sat eyes upon it in its original box.
Perhaps it does not exist anymore.
Like all kids raised in my era with these
lovely dolls - they played with them!
They were bought for that reason.
Yet, here I am today, at an age that we will not talk about,
playing with miniature dolls!
I never thought that after I married that I would
ever play with dolls again.
Maybe boredom has something to do with it?
Or maybe I miss that piece of my childhood.

Yet, as I have gotten older, I can say
that it does not matter.
Whether it be a love for Barbie dolls
or miniature dollhouse dolls - it
all boils down to one thing.
'A love for all things small'!

One of my Barbie dolls had a black gown with tulle
at the bottom with a little red rose attached.
She had long black gloves, black heels
with her microphone set.
I loved that set!
However today, I sure do wish that I had kept all of
my Barbie dolls and their accessories.
Why?
Because they were a part of me growing up
and also just to look back at the memories.

I have never thought about collecting any of the
Barbie dolls. It would not be
the same.
If I were to purchase any one of those dolls
I would not be able to attach any memories to that
Barbie.
That stage of my life is gone forever.

So now at this stage of my life - I am into Miniatures.
Really obsessed is the word.
And have been collecting mini's probably for over
30 years.
A little thing here and a little thing there.

However, last year I had gone to the thrift
store and purchased a small bag of toys.
Hoping that my doll would have some
miniature toys in that bag.
There were so many toys in the little bag
that you couldn't see everything that
it held.
The great thing about it is the little bag only
cost a dollar!
When I returned home and went thru the bag,
BOY was I ever surprised to
see what I pulled out of that bag.
Just months before I had been telling
my daughter Pep about that black gown that my
Barbie had as well as the rest of her beautiful
things.

Daisy loves dolls!
She collects them only when she can.
While at work one day she ordered this doll.
The postman brought it to her today.
I hope you
enjoy looking at what was waiting outside of
her door when she got home! 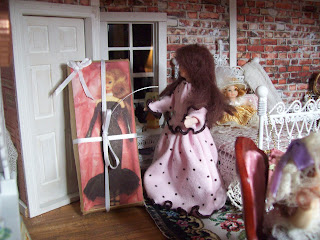 You guessed it - a Barbie doll!!
I made the box for this doll.
I went on the internet
and amazingly enough, I found this picture.
So, I made this box and glued this
photo to the front of the box.
The photo looks so
real that it looks like you are looking at the doll
up close. But you aren't. 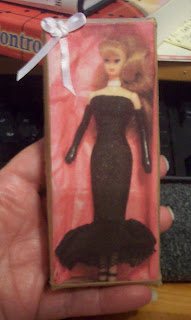 Daisy has been opened her box.
I put lovely pink tissue paper as
you see here. 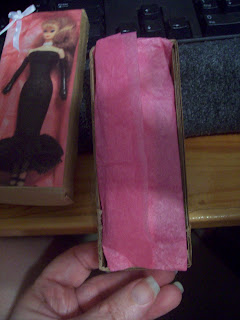 Isn't it amazing how good she looks.
I think that
this little Barbie doll was given away by McDonalds.
And that she was not played with at all.
I believe that she was new.
Her hair is in very good condition and in
the same position as the photo on the box.
Never touched.
Even the same color! 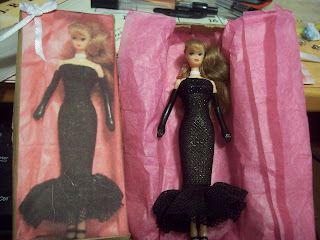 I tried to stand her up better for you to see her.
I sure was surprised to see her in the
little bag of toys!!
You never know what will strike a memory! 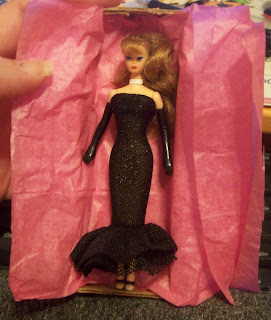 Even though this is just a Barbie from a
sales pitch of McDonalds - (I guess) - I feel
like I have been given a second chance - in
MINIATURE!
As always Many hugs & kisses to you all,
Conny
Posted by Hopblogger at 10:10 PM 4 comments: