Samantha has intentions of playing till
week long till she drops!

She is now all dressed up and ready to
go out of the door.
But before she left I convinced
her to let me take some pics of her costume.

Her nice mask was made by Diane Paone of New
Jersey.
My daughter Pep bought that for Sam.
She thought that she needed it.
It sure does help make
her more prettier.
The mask is just beautiful! 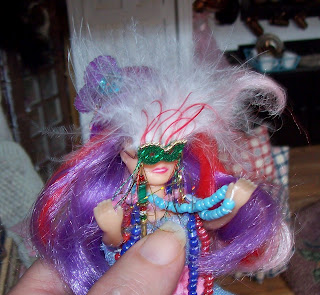 Here are her ju-ju beads. Red and blue are some more
of the traditional colors.
Sam needed the small strand of
pink beads.
They match her dress. Sometimes Sam likes
to chew on her mardi gras beads. 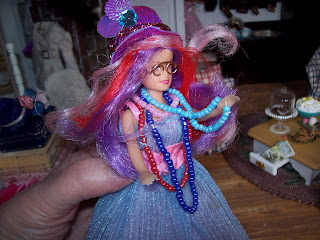 Here is a side view of Samantha & her sporty look. 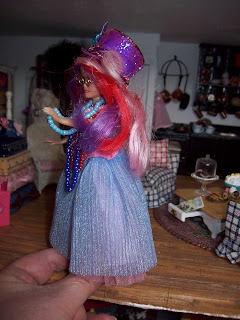 Samantha is sporting a wig that is made
from 3 different toys.
2 of the toys were small mermaid dolls and the
other was one of those
plastic colored horses that has hair.
I think he was called, 'My Little Pony'. but unsure.
In fact, the horse had the pink hair
while the little
dolls had the purple and the red hair.
Look at the piece of pink hair that is fly-away!
It wont lie down. Lols.
But its okay cause its cute.
I hope you like the front of her top hat!
I made it.

Her dress is a type of Barbie dress.
I added straps so it would stay on he
body. I gathered up the waist and gathered
the pink ribbon.
Then hand stitched the ribbon closed.
The pink below the dress is part of
the dress. 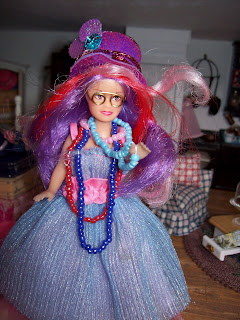 This pic shows the back of her hair and her
top hat!
The red scrolly that goes around the hat is
thin red wire.
It is miniature tinsel. So easy to use.
On the next pic, if you zoom in
you can see it better.
I show it on the
windows of the Bernice's Christmas
apartment.
I made the top hat many months ago.
I made the brim of the hat too small. I would have
liked for it to have been wider. 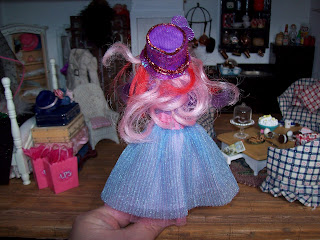 Here is a close up of the back.
The fabric on the hat
is actually made from 4 leaves that belonged
to a medium sized fairy doll.
The fairy was in bad shape
and so were her wings.
The wings actually look
better used as the fabric for the top hat.
The glitter on the
hat was already on the leaves - they are not added by
me.
I just tried to incorporate as much of the glitter
as possible into the hat. 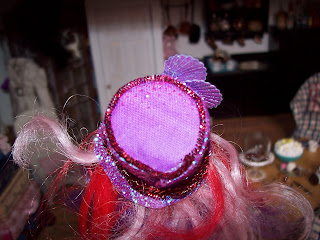 Maybe I should cut off that strand of fly away hair! 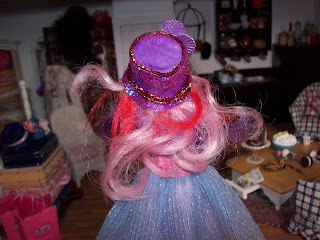 Another view of the hat. 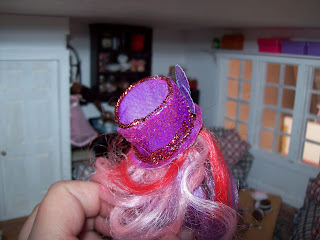 The little purple glittered leaves and the stone was
attached on a small Disney doll dress. It easily
came of and so I glued it to the hat.
I think it looks better on the hat. 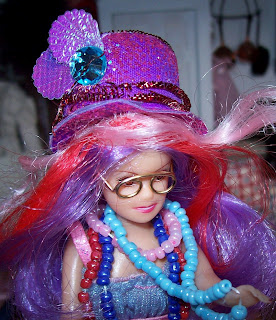 Another angle of Samantha. 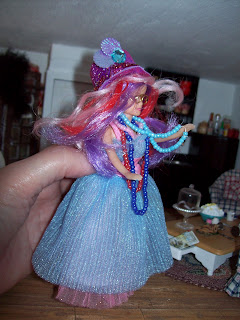 I thought that you would like to see her
tiny pink shoes. They are made of rubber and
easy to put on her feet.
They fit like they were made for her feet!!
These were found at the
thrift store for a dime. 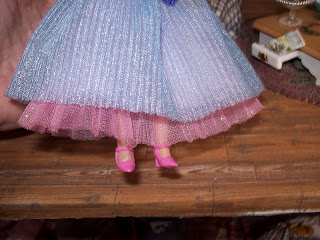 Such cute shoes.
I forgot to take off Sam's hose. 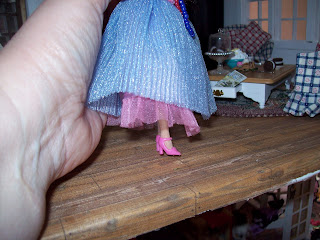 I do not think that I am going to glue anything on
these shoes.
If I do it will take away the ability of
them being put on and taking off of her feet. 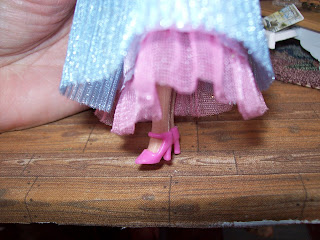 Come and join Samantha at Mardi Gras!
Hopefully she will see you there!
Enjoy the celebrations!
Thanks for stopping by!
Conny﻿
Posted by Hopblogger at 9:44 PM 3 comments: