I hope you will think it the same.
The pics you are about to see are not
in the magazine, some are close. I dont
think that I am allowed to publish those pics.
I hope you like Permelia's apartment.
This is the only entrance into the
witches apartment. 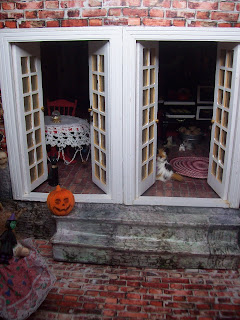 The pumpkin greets you on the stoop!
He bids you a welcome - come on in! 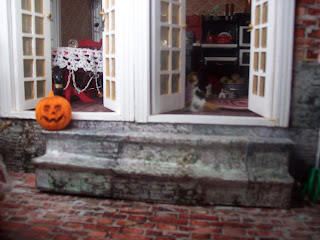 Another pic of the inside. Here you can see the far
wall. 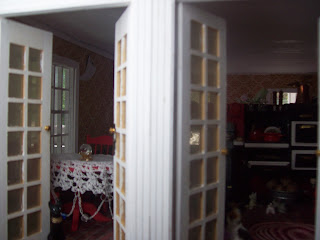 I dont like the tree on the outside. I do like the skulls
that are on it.
I think the tree is too small but I have
plans on how to make a cheap large tree. 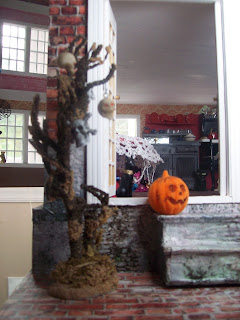 The little furry cat was bought in Germany over
20 years ago. I have carried him around with me
every place that I ever moved.  I would love to have a
few more of them. 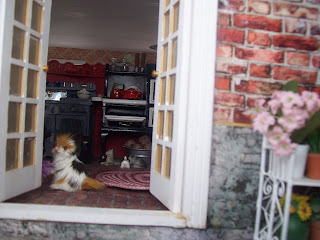 The apartment is alive with cats all over the place.
Some of them are funky colors but that is what happens
when the witches cast spells that backfire on them!
Lol's 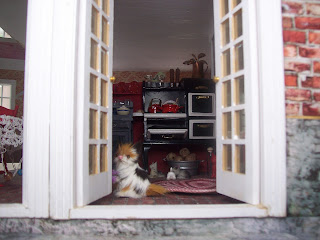 In this pic I am hoping that you notice the red wall
that is behind the stove. It is made from thick cardboard
and then painted red on the kitchen side and purple on
the bedroom side. It stands by itself.
You cannot see the purple side but that side has a place
for a bottom shelf.
My intention is to add more shelves
above it to hold some of the witches hats. 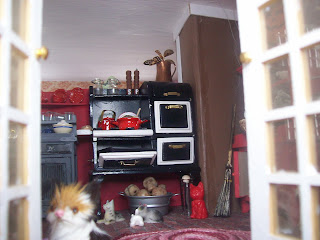 The furry cat whose name is Oscar is playing with the
kitchen witch. Its his favorite past-time.
The other 2 small kitties are named Tom and Jerry.
Tom has his
paw up and he keeps swatting Jerry.
Jerry is not in the mood to play.
The house keys always hang on the doorknob.
The witches are not scared. 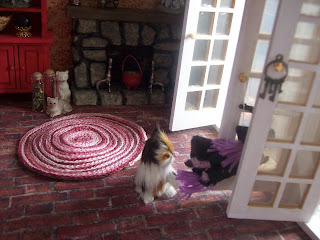 Sorry about the sink. I hope it doesn't
hurt your eyes too much when you click
on this pic.
Permelia has been cooking all day.
In the oven, the muffins are done and the aroma
smells good in the apartment drifting to the outside.
Turtle soup has been cooking on the stove.
It will be finished soon.
The bowl on the sink counter
is full of eyeballs.
The owners of all of these eyeballs
all had blue eyes.
I am sorry that you cant see them.
Under the stove is a metal tub. It is full
of skulls. The witches grind some of them and use
them in their spices.
After they clean some of them
they intend to hang them up clustered above the bed
in the corner.
The black cat is named Egyptian.
The gray cat looking at him is named Marilyn Monroe.
The other grey cat with the yellow eyes is named
after the color Ocre.
The cute little white butt that you
see that is in the air was a little gift from my
granddaughter Elise. I named her Tequilla.
She's very playful. Tequilla is very, very tiny!
I am really pleased with her.
I do intend on
putting some more cats under the stove.
It is warm under there.
Eventually I will
make a long cat bed that will fit under
the stove just to house all of these cats.
Well, I say that now, but you know how things change.
The red cat is just a wax figurine that Permelia
fell in love.
She just had to buy him.
He always sits beside her stove. 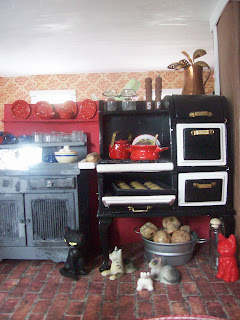 A friend made me the 2 braided rugs
This one is the bigger of the 2.
She made them from floss.
Both of them are the same color - in pink and red.
Thank you Tina. 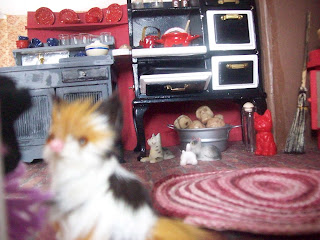 This is a small view of the apartment. I have packed
alot in here and there is still some room where I can
put some more stuff in here.
The brick floor is not paper, it is cloth.
I decoupaged it to the wood floor. It is a
different color from the outside brick.
The floor looks
a little older than the exterior.
You can get a good
view of the muffins in the oven.
It is a refrigerator magnet. 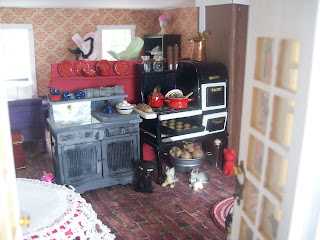 This is just another angle. The dishes are above the
sink on that free standing wall that I made. 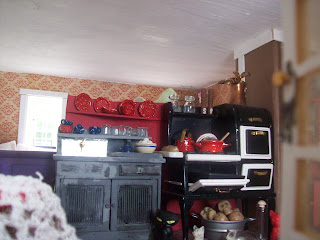 Just another pic that I threw in here. I hope you can
see the cherry pie on the top shelf above the ovens.
It was made  from a bottle cap. 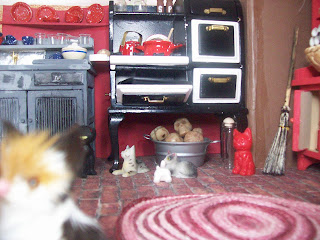 Oscar has played so much with the kitchen witch
that one of the doors has closed somewhat. This is
a good pic of Oscar. 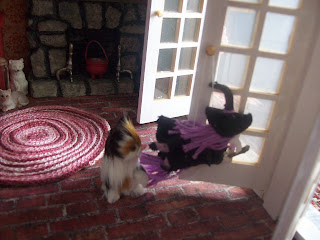 Here is the fireplace wall. I have some pictures already
that have been cross stitched that are going to hang
above this fireplace.
The strings hanging from the ceiling
represent some web strings.
The red cabinet looks really
sweet in this space, perhaps too sweet.
The top shelf holds alot of her spells.
None of it is marked but Permelia knows what
is inside each of them.
One of them holds Bone Dust, another Eagle eggs.
Besides she isn't going to tell you all of it!
The pumpkin watches over
all of these jars.
The shelves hold bones, scrolls and books.
There are apples in the resin basket bowl.
The black crystal
ball is for only special readings.
More jars are behind
the doors of the cabinet.
The basket beside the fireplace
holds wood logs. 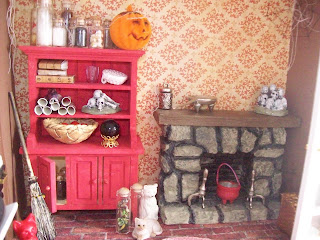 A loaf of french bread cools on the stove. Can you
see the eyeballs.
Sorry for the blur. 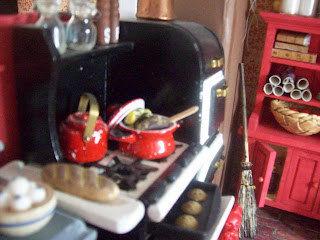 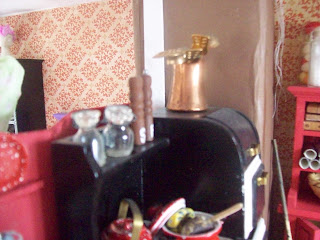 Have angled the door, to get a good pic of the
bed area. 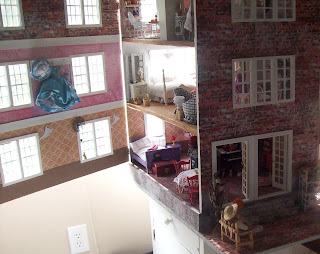 There is space for a dresser to go here. I dont know
what I will put in that little area. 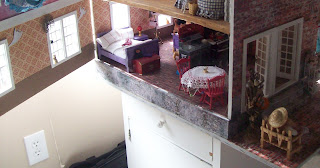 Can you see the apartment better. It sure is roomy
in there! 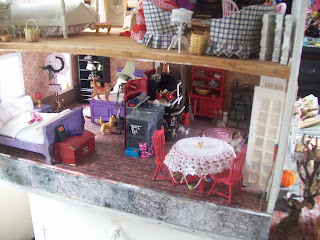 Have you seen these types of doily's?
Well its not really a doily.
Actually it is a cover for a small milk jug.
The beads weight it down so the flies do not get into
the milk.
I could have dyed it black but then you wouldn't
see the beads as good as you do now.
So, I opted to keep it white.
Permelia has a client coming over later. 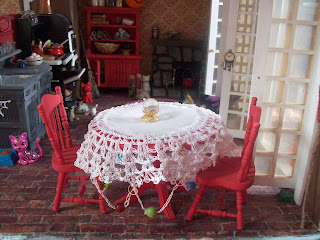 Did you notice the little green turtle by the door.
He wondered in unnoticed and now he is so scared.
He smells the turtles cooking on the stove.
Now he
wants to get out before the cats see him.
I wish him luck!
Hope you like the little pink cat.
Her name is Prissy
and her name just suits her.
She used to be a golden color
but Permelia thought she looked better pink.
So, Permelia cast her spell!
"with a little wink turn Prissy pink".
And thats how it happened!
Prissy never noticed a thing.
She's getting ready to eat but she stopped so
to have her photo taken. 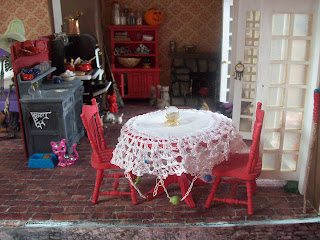 I found the little plastic blue food dish at the thrift store.
It is so cute, a little bigger than Prissy.
There is a little spider web with a spider
in it on the side of the sink.
The little red trunk is made of leather.
It used to hold a piece of jewelry.
I think that it looks good in this apartment.
I am going to use this trunk to hold clothing.
That is once I get them made.
The 2 cats in the bedroom
are intrigued with the skeleton.
Morris is the large tabby that is on the bed.
He is a show-off.
Later the skeleton is going to get his head cut off.
His head will become a hat stand
for Permelia's hat.
The cat on the floor keeps biting the skeletons legs.
He must be getting hungry??
'Hey Friar, if you are hungry go over there where
Prissy is - there's tuna in that bowl!

There is another cat laying down on the black bookcase
in the bedroom.
Can you see him back there.
He likes to watch
everything that goes on in the bedroom.
His name is
guardian because he guards over all.
He may be little but he has a lions roar.
Hmmm sounds like Permelia
needs to stop practicing her magic. 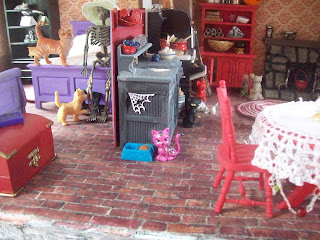 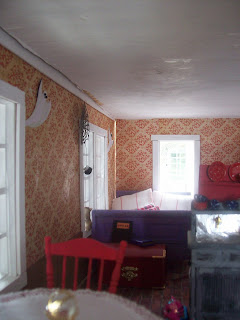 There is a large black spider web on the side window.
Dangling from it is a big black spider.
Pied Piper (the cat) is just waiting for that spider
to drop down low enough to get him. 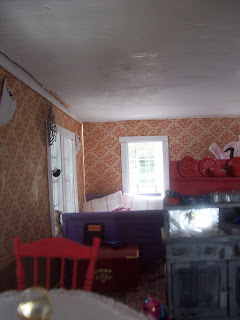 A better view of the main wall that
opens up. A ghost comes in from this window.
Maybe I should put a tall armoire on
this wall? 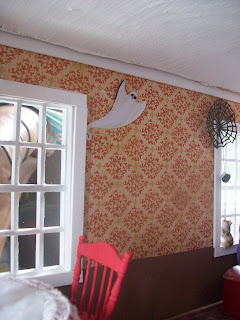 A better view of the spider web and the dangling
spider.
One of these days Pied Piper is going to get that spider.
There is another ghost on the other side of the window.
The ghost, cobwebs and spiders are just
stickers. 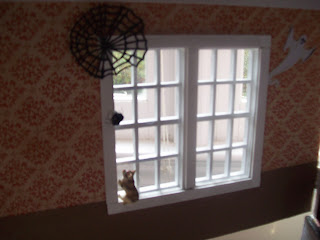 The table is beside this window. There is a delicate
spider web with a teeny tiny black spider. I have 2 of
these. Can you find the other one? 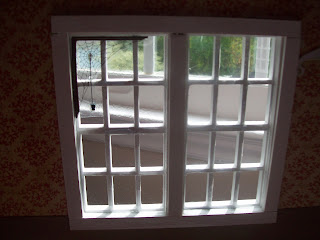 Here is the view looking in. See the table and further
back is the red cabinet.
I love looking in through windows.
That is why I dont like to cover them up
with curtains. 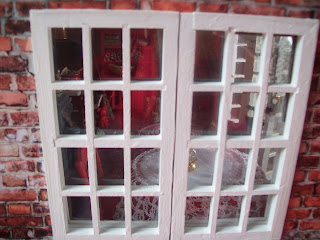 This window is beside the bed.
You cant see the cat
very well trying to get the black spider.
I tried awfully
hard trying to get a good photo of it.
Unfortunately this
was the best that we could do.
See the little stockings on the bed.
They make look long but they are very small. 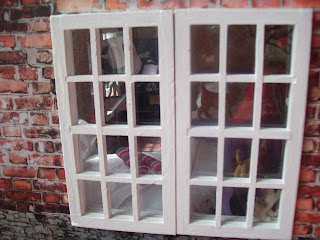 I hope you enjoyed the photo's of Permelia's apartment.
Many hugs to you all,
Conny
﻿
Posted by Hopblogger at 12:38 AM 2 comments: