It only took me 5 minutes to make
the witch Permelia's  wand.
It was so easy!

And you will not believe
what I made it out of!
Can you guess?
My only problem is, 'should I paint it'?

I am making up a tutorial
and hope to post it soon! 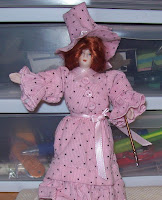 Here is what the top of the
witches wand looks like.
Its pretty impressive - isnt it.

Here is the bottom half of the
wand

Thanks for visiting me!
Hopblogger
Posted by Hopblogger at 7:32 PM No comments:

Email ThisBlogThis!Share to TwitterShare to FacebookShare to Pinterest
Labels: APARTMENT WITCH PERMELIA - Permelia has a wand!

I am telling her to turn around - but she
won't. She's a little shy. I sure do like her
long red hair.

I had to turn her around.
Permelia is a good witch.
However she didn't
like me moving her. She said that
she's gonna cast a spell on me for
interrupting her train of thought.
That is - as soon as she gets a
wand!
Permelia has griped all
afternoon. She don't like her
hat nor her clothes. Says it makes
her look plump!
While I am
thinking about it - her hat was made
from the directions using Casey's Mini's
blog. She has great directions.
I just so happen to like making
my hats without any cardboard.
I like the soft look.
Now that I have started - I cannot stop.
They are so easy and addictive!

She says and I will quote her,
"my hat looks like it has
been cut off. Don't you know that it
should be up and pointed"!
She even had the
nerve to ask me, "what is wrong
with you. Don't' you know what a
witch is suppose to look like"!
Apparently I don't.
I sat and listened to her for what seemed
like eons.

Her complaint
about her dress is that the bodice
is too tight, that it bulges her bosom
and her skirt is too loose. Well ,I can't
help it if her bosom is too tight and her
skirt is too loose because of the weight
she has gained.
Lose weight Permelia
and then maybe it will fit you better!
She does look busty doesn't she?
Shhhh, don't tell her I said that!
That will be 2 spells she will cast upon me. 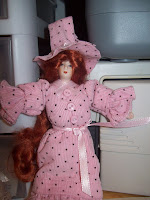 Permelia needed a new dress.
The white frock is at least 14 or
15 years old. Still doesn't look bad.
But Permelia is going to check out
an apartment in just a few hours.
An apartment has come available
in the old French district.
A very desirable area. 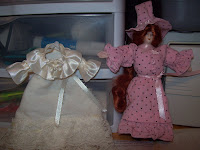 Permelia is going to wear her old leggings
and her hat when she goes to look at the apartment.
Gonna try to look presentable.
The realtor cannot come - so she has agreed
to give Permelia the key - so she may view
the apartment in private.
She has promised me that she will be discreet.
They just might not understand and she might
get turned down for the apartment if they
know that she is a witch.
Oooo, love those great red striped leggings!
Hide them! 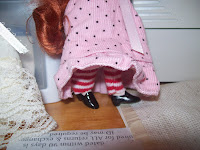 This old frock is definitely going into
the yard sale bin! By the way the white
loops at the neckline go around the
clothes hanger to keep it from falling off.
Permelia thought that perhaps someone
wouldn't know what it was used for.
Does Permelia think people are stupid!
The dress was easy to make and
I need to post the pattern, but
have not had the time to do
so lately - but I will!


Permelia was one of those
little kits with legs, arms and
a head with molded hair.
Since, I only had these type of
kits, I had to do the best that I could.
So I put hair on them!
And at that time she was not
a witch, just an ordinary doll. 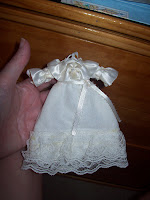 I tried to make Permelia an
ugly witch - but it seems that I cannot do
ugly. I cannot do pretty either.
So, Permelia is in the middle of the two.
And I like her hat and her clothes!
I think that these bent hats are going to
be her trademark! When I find a star
I am going to attach it to the end of
her pointed hat. She will most likely
get mad at me. By then I am sure that
I will have 3 strikes against me.
Let's hope I am still around to post again.
Maybe the stress of moving has her in a tizzy.
Tomorrow I will show you the apartment if she
chooses it.
I hope you like Permelia's new look.
Hopblogger
Posted by Hopblogger at 8:57 PM 8 comments:

in miniature!
Have you ever seen one
of these kitchen witch's.
They symbolize good luck!
Some of them
are so ugly that they are down right cute.

This little kitchen witch is going to hang down
from their ceiling.
I didn't have any pattern to go by so I
had to make up my own. Truthfully
I didn't think that she was even going to turn
out! I wanted the little witch to be 1" X 1".
But I was not able to make it that little. 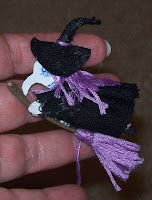 The broom measures (from the tip
of the handle to the end
of the purple floss) 3 inches. I used a
small piece of a stick that my hubby
retrieved from the backyard for the
broom. I wanted it as natural as it could
be. Initially, I wanted
her to look ugly but apparently I am not
good at ugly!
She needs to be uglier!

Perhaps later I will dry making
another witch and painting her green.
If I do, then I will make a
tutorial.

Her eyes and mouth are drawn on
with a blue ink pen.

Here's another angle. I think
the glue on her only adds character. It
makes her look like she has some cobwebs. 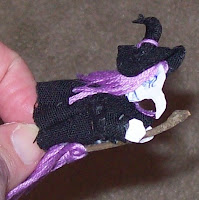 I wanted a crystal or something
to hang down from the tip of her hat.
However for now I omitted it because
I couldn't find in my small stash
anything that was small enough.
Her legs are
a pink stretchy fabric.
For her shoes, I just used a permanent magic marker.

Here is the underside of her.
She is glued onto the broom. I
hope that you like my mini
kitchen witch!

Soon I will show you the
empty apartment.
Conny
Posted by Hopblogger at 8:51 PM 8 comments:

Marlene is having a giveaway. A tiger skin rug
among other things! Go there - take a look &
sign up!
www.somersethouseproject.blogspot.com
Posted by Hopblogger at 1:11 PM No comments: