Hello Everybody!
How have you all been?
Thank you for looking at my posts
and for commenting.
I appreciate it all.

Halloween is just around the corner and
I have been busy for a while in making over
the bottom floor witch apartment.
Especially
since Permelia was only renting the apartment and
last year she moved out in search of another
apartment!
Permelia was renting this apartment back in 2011.
You can see her apartment when she lived there if you
check the right side under the mini labels.
Look for all of the posting with her
name Permelia and you can view them all.

Also, Permelia's apartment was published and featured in the
"American Miniaturist" magazine October 2011,
issue 102.
It featured on page 90 and I was given
5 full pages!
It was called, "A Bewitching Apartment".
The pages show the other 4 apartments also as to
what they looked like at the time.
Thank you again - Miss Traci!
It was also published again in 'Dollhouse Miniatures'
or 'Dollhouse World' magazine,
but I have forgotten the date it was featured.
I think it was in 2012. I was so surprised and thrilled!!
I would have shown it back then, but I could not
get the magazines on my site.
I will try again soon.

Since Permelia moved out the landlady decided not
to change any of the wallpaper or floors as it still
looks in good condition.
The landlady rented the apartment
to a lady named Irena Infect.
Unbeknowing to her - Irena is
also a witch!
You will meet her real soon.

I cannot
for the life of me decide on a name for this Inn.
Sometimes
I want it to have a name and sometimes I don't.
If I do
not have a name then it can stay secretive and hidden from
the outside world!
If I name it then who knows what porcelain doll will come
by and peek in, only to be disillusioned that this Inn is not
for the mortals!
So, at least for now, I will call this
'The Witch's Inn'

Note: Do not worry, all of my witch's are sweet! And most
importantly they hold jobs and help out each sister!

Also I want to say, that it is possible that Permelia moved
out of this apartment because it was haunted by ghosts!
So you must meet the ghosts also!
I have been getting into Halloween.
This is so much fun!!

Now, this apartment in Louisiana has become a small Inn.
And the owner
of this Inn is named 'Irena Infect'. S
he is the 'Innkeeper' of
'The Witch's Inn', situated in the 'French Quarter'.
She does not make much money cause
she is so sweet.
She lets anybody stay at the Inn,
even if they do not pay her.
She never turns anyone away!
There are all kinds of conventions going on
this week in the French Quarter so her
Inn is at full capacity!
Some of them must sleep in chairs!

Just in case you could not zoom in to see.
I love these awards/certificates that I buy
from Ellie Falco.
She is on eBay and Facebook.
She makes and sells these at good prices.
Go talk to her!!! 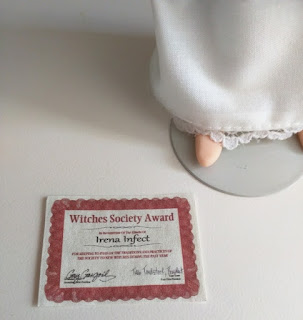 Meet - 'Delilah Deranged'.
She is the towns 'drunk' witch.
And she stays at Irena's Inn almost
every night.
Grateful to sleep on the sofa! 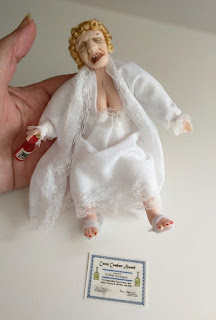 Meet - Hepsiba Hallows.
She is a
Hairstylist and she lives in Vermont.
Hepsiba is a long way from home.
She is in town
for a 'Hairstyling Seminar'.
She often
tires out easy and is often seen sleeping.

Most of the time she has her comb, mirror
and scissors in her hands.
watch
out if you wake her up, she might
accidentally cut you!
After the seminar
she will immediately get on her
broom and fly home.
Hepsiba forgot her bag with her
night clothes.
I guess she will be
sleeping in what she has on. 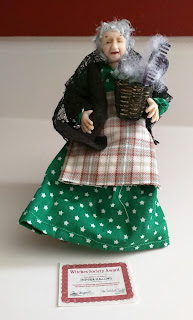 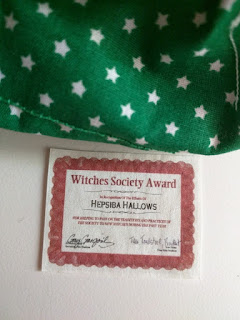 Meet - Hilda Hagg.
She is an 'Historian',
for witch's, that is.
She knows anything
and everything there is to know
about the history of witch's.
She also,
is in town to give a speech at the
witch's convention.
She will be conversing
about Dorothy and 'The Wizard of Oz'.
Afterwards, her
broom will take her back to Kansas
where she can rest up before making
another speech in another State.

Hilda is already dressed in her
nightgown and robe, ready to get
some sleep eye. 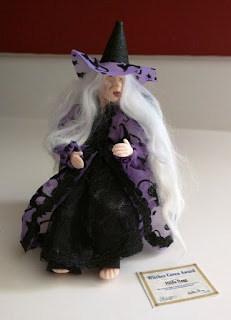 Meet - Narcissa Nagg.
She is a nutritionist from the
State of Arkansas.
They have lots of old witches
that live there.
Narcissa is also ready for bed.
She has her blanket
that always travels with her.

This witch is highly sought
after for her knowledge of
keeping witch's healthy.
She had some brochures but
she has misplaced them somewhere. S
he will be here
at the Inn for at least 3 days. 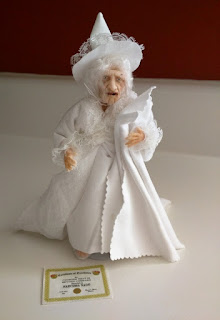 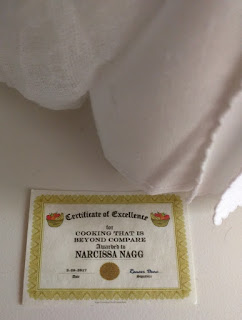 Meet - Wendy Wendlewood.
She hangs wallpaper.
She brought some samples with her.
Wendy travels
all over the states and is in high demand, cause
she is the very best in her field.
She will be hanging
wallpaper in a very expensive 'mortals' house
on this occasion.
I wonder if they know they hired a witch!

They have paid for her trip here.
She will be here for about a week.

Wendy is already for bed.
Don't you just love
her long flowing red hair that is turning white! 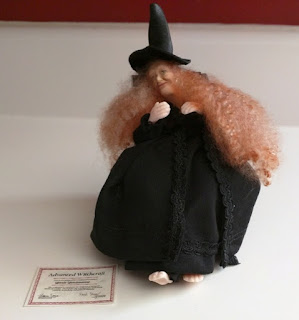 Meet - Reubella Rattles.
Most of the
time she rattles chains,but Irena
has banned Reubella from rattling
chains when out of town guests
are here.
It is okay to rattle them
when only Delilah stays at the
Inn.
Delilah does not mind.

Sometimes this angers
Reubella.
But there is nothing
that she can do about it.
Irena will banish her from the
Inn, if she disobeys her.

Meet - Cherie and her baby Charlotte.
Both of them died in this apartment, back in 1917 when
the 'Spanish flu' was going around.
Both of them were buried together.

Each night Cherie comes out of
the painting holding her baby
looking for her bottle of milk.
Which is never found.
By morning
she returns back into the painting.
So sad! 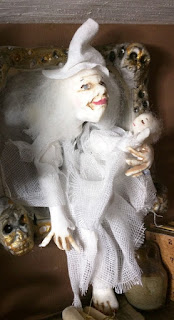 Meet - Cookie.
Her fate was really terrible!
Cut down at the ripe old age of 102.
She
was taking a bath and drowned while
playing with her ducky.
She does
not know how her legs got cut off!

Nothing more is known about cookie, cause she
cannot remember how it all happened.
Sadly, she only remembers her age.
And if you need
a bath, she will not get out of the tub,
so if any witch wants in, they must share
it with her.
Most just let her be. 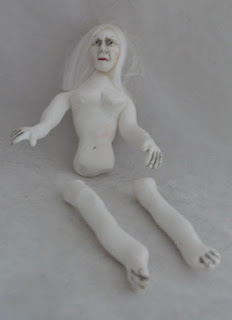 Meet - the ghost twins, Remmy on the left and Bemmy
on the right.
They used to have a good life
until an evil witch spotted them playing too close
to her lair.
The witch gave them a lollipop that
contained a potion in it to turn children into
ghosts!

Ever since then, when they found Irena,
they follow her
everywhere that she moves too since they do
not have a permanent home.
I guess their permanent home is
with Irena.

The twins play tricks and are always trying to spook the
guests but their schemes never work.
The little darlings are bored. 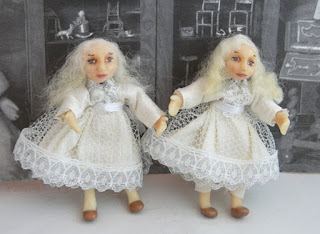 Meet - Betsy Sue.
She is the cook, the maid and
anything else that Irena needs her to be.
She is the only help that Irena has!
Poor Betsy Sue.
She works so hard from sunup to sundown.
She used to be a mortal until
one faithful day when she was strolling around
in the woods.
She also met up with that evil witch.
Betsy Sue used to be so lovely as a mortal.
Look at her face -
she is still lovely to this day!!
The evil witch
has many traps set all around her lair so that
no one enters it - if they do - they will meet
the fate of the potion.
In this case, Betsy Sue
was thirsty and drank from what she thought was a
good 'Water Spring'.
It glistened and did not
look bad.
But the water spring was tainted to
turn any mortal into a bear.
That is why so
many bears are running around in that forest!

As Betsy Sue was unable to return back to her family,
she happened upon Irena.
And Irena took her in to live with her.
She feeds her and makes sure no more harm
comes to her.
Irena tried with all of her
might but she cannot change Betsy Sue back into
a mortal.

Now, bears hibernate - but Irena was able to make a potion
and cast it upon Betsy Sue so that she will not
hibernate like the other bears.
Betsy Sue
is forever in Irena's debt until hopefully the evil
witch dies or 'a high priestess' witch can
change her back.

This is a Christmas Ornament that I have
had for many years.
I was not using her and she
is the correct size for a miniature. I wanted to
use her here, so I named her and of course she
needed someone to look after her.
Isn't she adorable! 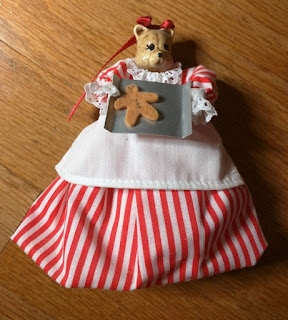 This is the back of Betsy Sue.
She looks very
simple to make if you wanted to make her.
Or, perhaps someone is selling her. 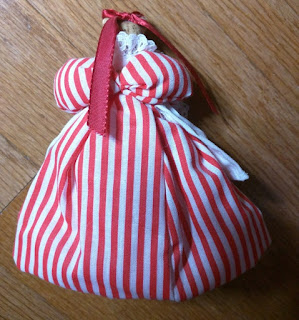 This is how she stands up all by herself.
The tulle is the stiff kind and it
is rolled up as you see here.
This is kind of a good way to make a doll stand up
under her dress if she has no legs. 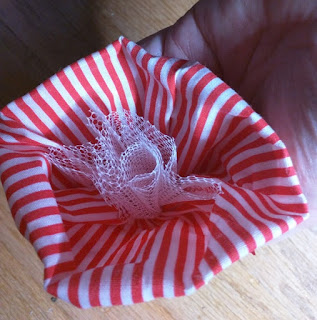 These witch's and ghosts, (except for the bear) are all
made by Detta's Darling Dolls.
She will  make anything
that you want.
And she sells them all at an
affordable price.
Check her out!
She sells them on eBay, so here is her store address.

Thank you all for visiting me!
I hope that you have had a great time reading
their stories and looking at my sweet witch's and
wonderful ghosts!
I will be posting again soon the things that are
inside the Inn.
And then will post again, the Halloween apartment!
Hopblogger
Posted by Hopblogger at 2:07 AM 3 comments: